Two quick reviews for you: Reading Rants weighs in on FORGE and WINTERGIRLS reviewed in Colorado.

How did your writing go yesterday? Mine floooowed. Like creekwater after a thunderstorm. Sugar pouring from a blue china bowl. Like round hips swaying under a loose skirt to a hot salsa trumpet.

Seriously. It was that good. It was hard to come back to the real world and do things like eat. Run. Brush teeth.

As the sun started to set, the Muse returned. Much to the dismay of my chickens, she arrived in the shape… 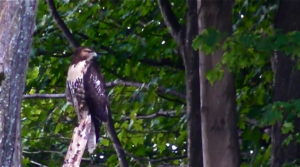 ….of a large, hungry-looking

She watched the very well-protected henhouse for a while

then took to the air

back into the Forest.

It was breathtaking. Especially for the chickens, who, I am happy to report, escaped disaster. For the moment.

Ready… “O for a Muse of fire, that would ascend
The brightest heaven of invention,” Henry V, William Shakespeare

Set… make sure any rodents or poultry you care about is under roof. Then turn off the damn phone.

Today’s prompt: Make a list of ten animals that could be your Muse. Circle the one that evokes the strongest reaction in you; positive or negative.

Write a scene in which you or a character has an interaction with this animal. At some point in the scene, the animal does something to change your emotional reaction to it. Either you first find it cute, and then disgusting. Or at first frightening, and then enchanting.

After the emotional switch, you get to ask the animal three questions. What will you ask? And what are the answers?