Censorship is in the news again. Start out your Saturday by reading  Pat Scales’ great article about Common Sense Media, Three Bombs, Two Lips, and a Martini Glass.

Then bring yourself up to speed on the censorship battle surrounding the Teen Lit Fest in Humble, TX. My friend, Ellen Hopkins, was disinvited to speak after complaints about her books. Ellen blogged about it . Several other YA authors who were scheduled to appear at the festival decided to boycott the event to show their support of her.  Take the time to read Tera Lynn Child’s letter to the superintendent, and Matt de la Peña’s explanation about why he joined the boycott, Melissa de la Cruz’s decision to do the same thing, and finally, Pete Hautman’s blog post about why he won’t be speaking in Humble, either.

I am furious that officials removed Ellen from line-up. I respect the decisions of the other authors to show solidarity with her by withdrawing from the event.

I’ve thought long and hard about my opinion about the boycott and if I should join the conversation. While I was running Thursday evening, I finally found the answers I’ve been waiting for.

I don’t think a boycott is the most effective way to deal with this issue.

Again – I have only respect and fondness for Ellen and mountains of appreciation for her work. She writes honest books about hard things – the kinds of hard things that kill our teenagers. Kids need her books. Her books save lives.

But this is one of those situations where friends have to agree to disagree. Because I think that the boycott removes the opportunity for the other authors to speak up.

Teenagers particularly need the chance to talk about hard things because they are developing their moral codes and have to sort out their own sense of what is right and what is wrong. That’s why I am such a supporter of Ellen’s books. That’s why I write the kinds of books that I do.

My concern about the boycott is that it takes away the possibility for discussion. Not with the people who banned Ellen and her work. It’s clear that they are not interested in conversation of any kind. (Shame on them for their cowardice.) But by boycotting, the other authors lose the chance to speak up about censorship to the audience that deserves it the most – the teens in Humble, TX who have been denied the chance to talk to Ellen about her work.

That’s what I would have loved to see happen: turn the Teen Lit Fest into a day of talking about book banning, and censorship, and the precious right we have of intellectual freedom. It would be cool to hear how the teens of Humble TX think that censorship should be confronted. Todd Strasser has written about his decision not to join the boycott. I hope the kids who attend his sessions can have great conversations about the insidious evil that is censorship.

TEACHERS AND LIBRARIANS!! You have a golden opportunity here!! Make this whole mess part of your discussions during Banned Book Week (Sept 25 – Oct 2) and Teen Read Week (Oct 17 – 23). 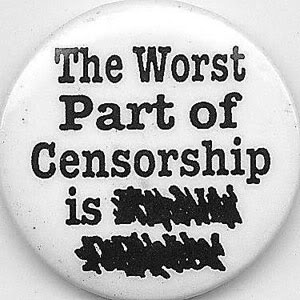 Ready… “Censorship reflects a society’s lack of confidence in itself. It is a hallmark of an authoritarian regime. Long ago those who wrote our First Amendment charted a different course. They believed a society can be truly strong only when it is truly free. In the realm of expression they put their faith, for better or for worse, in the enlightened choice of the people, free from interference of a policeman’s intrusive thumb or a judge’s heavy hand. So it is that the Constitution protects coarse expression as well as refined, and vulgarity no less than elegance. A book worthless to me may convey some value to my neighbor. In the free society to which our Constitution has committed us, it is for each to choose for himself.” Supreme Court Justice Potter Stewart

Set… turn down the shouting voices of opposition and take a few quiet moments to center yourself.