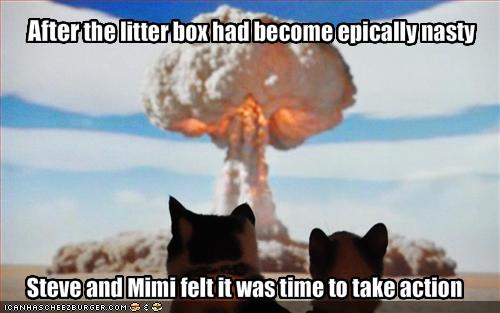 Question 3: Any plans to write the final book to Chains – Forged series?

Answer 3: Yes, yes, a thousand times yes! As soon as this YA is done, I will dive into the final book of the trilogy, called ASHES. I can’t wait.

Question 4: You’ve never seen or met your characters, I assume: what techniques do you use to construct dialogue? How do you translate REALNESS into what they say?

Answer 4: I hear dialog in my head. It is often where my stories start; I’ll be out running or driving and I’ll hear the main character talking. Even though dialog comes easily to me, I find that I revise it countless times. In early drafts I’m often unaware of the nuances of the relationships between characters. As the book comes together, I might realize that a short line of conversation in chapter three sets up the Enormous Plot Twist in chapter 37. Also, my early drafts of dialog always, always, always, contain kitty litter.

“Kitty litter?” you ask, with a polite, nervous smile.

Kitty litter is the stupid fillers that like to gum up a sentence so that the important words get lost. People speak in short, often broken sentences. If your dialog reads like narrative instead of sounding like it could be spoken by living human beings, look for the kitty litter. Cut mercilessly to bring dialog to life.

The turds are clunky bits of backstory that stink up perfectly good dialog. “As you remember from our childhood days at the lake, Jethro, I never learned to swim.” I wind up with dialog turds all the time in early drafts, largely because I need to remind myself of backstory elements. You must go through and remove these horrors when you are revising!

“[I start with an emphasis on] character, definitely. And by character I mean a person drawn full-round, not a caricature. E. M. Forster refers to “flat” and “round” characters. I try to make all of mine round. It takes an extrovert like Dickens to make flat characters come alive. But story as such has been neglected by today’s introverted writers. Story and character should grow together; I think I’m lucky so far in that in practically everything I’ve tried to write these two elements have grown together. They must, to give an impression of life being lived, just because each man’s life is a story, if you’ll pardon the cliché.”

Today’s Prompt: Eavesdrop in a public place and jot down the bits of conversation that you hear around you. Cafeterias and food courts are good for this. The New York subway is an exceptionally rich spot. The point is not to steal something for your story, or to be arrested. It’s to get you to hear the rhythms of real speech and get a sense for what they look like on the page.

If you have a work in progress, ask a friend to read and record several of the dialog passages for you. Play back the recording and mark what sounds natural and what sounds clunky. Toss out both the turds and kitty litter and start fresh.