I saw a lot of early autumnal hints on my run this morning. Dark, low clouds scuttled from Lake Ontario to the Tug Hill Plateau like hungry crabs. The first small flock of geese passed overhead, either going for a test flight, or intent on getting south early so they’d have the best condo choices. A few sumac bushes have flared red and brilliant orange. The corn down the road from us is fully two feet taller than I am. And as I trudged up the driveway, a huge collection of robins had gathered on the lawn, arguing about those geese and whether they were prudent or crazy.

That is what early August feels like around here. (Attn: SCBWI conference participants… add this to the reasons of why you should move here!) Part of why I love living in the country is that it is easier to stay connected with the natural flow of the seasons than in, say, Los Angeles.

This got me thinking about how we show the passage of time in our books. 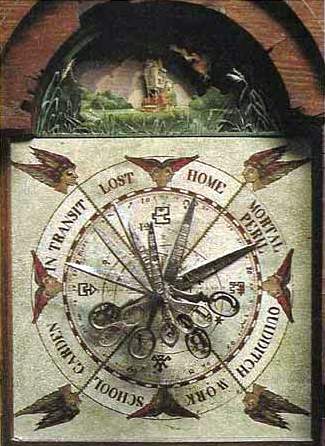 (Thinking about time always makes me long for a Weasley clock.)

The way your narrator describes the passage of time can be a wonderful tool that will show your readers how the narrator’s mind works, and give a sense of that person’s world. If you find ways to mark time other than the conventional “two weeks later,” or “On Monday,” or “after several hours,” you can create a much more interesting story, and sneak in contextual clues.

The early drafts of SPEAK were loaded with the conventional time markers. So much so that my editor gently suggested that I find a more creative way to let readers know that time was passing. That’s when I hit on the idea of using school holidays as a marker; those chapters that are built around Halloween, Thanksgiving, Christmas, and Valentine’s Day were all inserted to help the reader figure out where Melinda was in the school year. (The use of semester breaks and report cards had been in the story from the first draft.)

Ready… Yes, that is Autumn tapping her watch and telling you to get a move on. Winter is lined up right behind her.

Set… “The scariest moment is always just before you start.” Stephen King

Today’s prompt: How does your character measure the passage of time? The seconds? The hours? The days and years? Does she measure the time it takes for her mother to get out of bed on Saturdays by the number of cartoons she gets to watch? Or does she mark the days of the week according to what is being served in the cafeteria? List as many as you can in fifteen minutes.

OR!! Come up with a list of creative ways that YOU secretly measure time! What do they say about you?