I was going to blather on more about the state of flow and mindfulness today, but the universe had other plans.

Every once in a while something happens in the news that you can use in your writing, whether its in your Work In Progress or in free-writing.

What am I talking about? The Jet Blue flight attendant, Steve Slater, who reached his breaking point with a rule-breaking, rude passenger, deployed the emergency chute, grabbed a beer and left the airplane.

Is your character going to do that?

But it is a great example of the reaction of a person who is under pressure.

Anyone can behave well when life is going swimmingly. It’s the choices that people make under pressure that give you the most insight into who they really are. Sometimes it takes tremendous pressure or drastic change for a person to learn about herself. 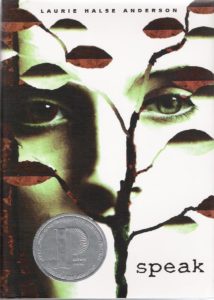 Writers sometimes care so deeply about their characters that they hesitate to make the going too tough for them. The early drafts of SPEAK all featured pathetically lame endings because I didn’t want the main character to have to be traumatized even more than she already was.

It took a while but I finally figured out that I had to (rather literally) back Melinda into a corner to force her to fight her fear and find her voice.

“Write about what you’re afraid of.” Donald Barthelme

Set… Turn off the phone, Internet, and inner critic who doesn’t want you to make waves.

Today’s prompt: Craft a scene in which your character is backed into a corner, pushed against the wall, driven to the brink. Force her into an emotional reaction that is the sort of thing she has never done before. What will she do? Why? What does this tell you about her that you didn’t know before?