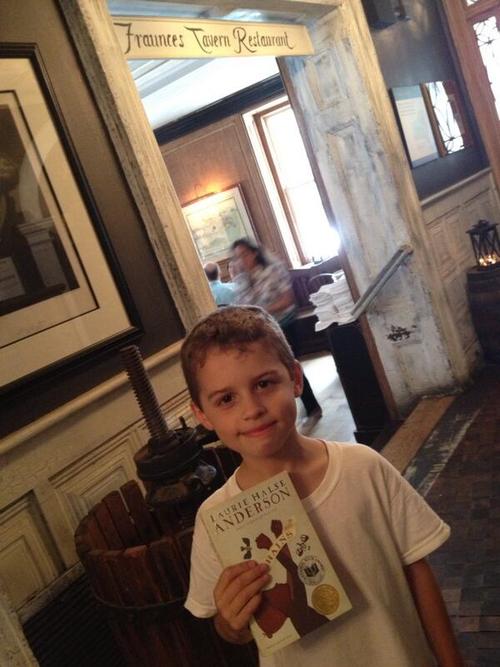 A couple of weeks ago, the mother of one of my young readers contacted me on Facebook and wrote, “I’m going on a short trip to NYC. My son wants to see one of the places from CHAINS. Which one spot should he see?”

Not only did her son read and enjoy the book, but he wanted to take that experience to the next level and walk in the footsteps of the characters. AMAAAAAAZING!

I suggested that they visit the African Burial Ground National Monument, which shows visitors about the lives of enslaved and free black New Yorkers and their connections to African culture, and the Fraunces Tavern Museum, which is filled with artifacts and information about New York City during the American Revolution.

Not only did they go and have a wonderful time, but the Mom kindly posted this photo (reproduced with her permission) of her young history buff. 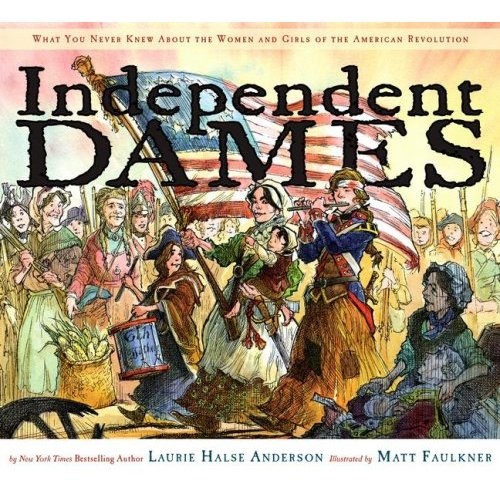 The fantabulous dames over at readergirlz have designated March as Risk-Taking Month. On the last day of February (Loyalty Month) they featured Independent Dames; What You Never Knew About the Women and Girls of the American Revolution. But given the subject matter, I think we can celebrate it in both February and March!

You can read the short essay that I wrote about the book. Then hop into the conversation; do you think women’s contributions are still being marginalized today the way they were during the American Revolution?

Did you cry? I cried. I’m still crying.

I wonder if Americans felt this way when the American Revolution ended and the sun came up on a new country that was filled with hope, optimism, and the determination to make the future better than the past.

I think they did.

My heart goes out to the people who supported McCain. They’re hurting today. I hope those of us who supported President-Elect Obama will follow his gracious lead and reach across the aisle to reweave the fabric of America. Partisan politics almost destroyed our country. We’ll have countless opportunities every day to repair the damage.

Let me tell you about the cab driver who took me to the airport yesterday.

He fled Ethiopia when that country was rocked by a Communist take-over in the late 1970’s. He had been an electrical engineer with an advanced degree there. Here he took whatever job he could to provide for his family. He became a citizen, paid his taxes, and voted in every election. He and his wife have raised three children: a scientist who is researching HIV/AIDS, an electrical engineer, and a daughter who is entering medical school. And like I said, he drives a cab.

We agreed that an Obama victory would be the greatest event of our lives. “I came to America because I could be safe here and raise my family,” he said. “I came here because Americans are good people. We take care of each other in this country. We work hard.”

That was when he choked up.

The Obama victory is not the end, it’s just the beginning! I think I’ll be humming the National Anthem all day.

Oh, yeah… I’m still on booktour! School visits all day today and tomorrow. My next public event is north of New York City….