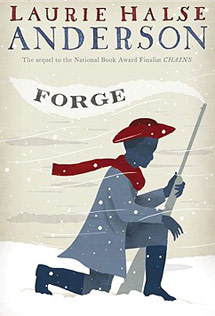 In this compelling sequel to Chains, the perspective shifts from Isabel to Curzon and we learn what it takes for runaway slaves to forge their own paths in the midst of the chaos of the American Revolution.

In the desperate circumstances of the Valley Forge winter, Curzon the boy becomes Curzon the young man. In addition to the hardships of soldiering, he lives with the fear of being discovered as an escaped slave passing for free. Isabel is also at Valley Forge—against her will. She and Curzon have to sort out the tangled threads of their friendship while figuring out what stands between the two of them and true freedom. 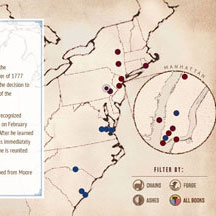 “Forge (like Chains) would be an ideal classroom companion to more traditional history book fare, one that readers will likely relish as much for its sensitive storytelling as for its gutsy depictions.”
—Kidsread.com review of Forge

“It is difficult to imagine there will ever be historical fiction about this time in America that is more nuanced or respectful of time and place. . . . Anderson’s Forge is a terrific return not only to the colonial era but to historical accuracy.”
—The New York Times Book Review on Forge

“Not only can this sequel stand alone, for many readers it will be one of the best novels they have ever read.”
—Kirkus Reviews, starred review of Forge

“Anderson seamlessly weaves her fictitious characters into history in a cohesive, well-researched narrative about the Revolutionary War that still focuses foremost on developing characters and their interpersonal relationships.”
—The Horn Book, starred review of Forge

“Anderson’s detailed story creates a cinematic sense of history while raising crucial questions about racism, the ethics of war, and the hypocrisies that underlie our country’s founding definitions of freedom.”
—Booklist review of Forge