Born into freedom in Philadelphia, PA. At age 14, he joined the fledgling United States Navy and worked as a powderboy on Stephen Decatur’s ship, Royal Louis. During his first voyage, Forten stayed at his battle station during a bloody encounter with a British warship. On the next voyage, in October 1781, he was captured and jailed on the notorious British prison ship, the HMS Jersey, in Brooklyn for seven months. A British captain offered him a job and a place to live in England, but Forten refused to be a traitor to America. He later helped defend Philadelphia in the War of 1812.

After the American Revolution, Forten became an important businessman and leader of the abolition movement. He bought a sailmaking business and hired both black and white employees to show the people of Philadelphia that people of all races could and should coexist peacefully. Forten ran his business with such skill that he quickly became one of the wealthiest men in Philadelphia. He was one of the leaders of the effort to protect Philadelphia from the British in the War of 1812.

As white supremacists fought back against abolitionism in the early 1800s, Forten became an important voice and powerful figure in the ongoing battle for racial equality and justice. He funded William Lloyd Garrison’s abolitionist newspaper, The Liberator, and saved it from ruin.

Forten and Paul Cuffee discussed the idea of helping African Americans return to the African continent to escape the horrors of slavery and the racist attitudes of white supremacists. But overwhelming majority of African Americans in the early 1800s strongly rejected attempts to send them to Africa. They were Americans; they wanted (and deserved!) the freedoms and equal treatment promised in the Declaration of Independence.

Forten’s wife and daughters Margretta, Harriet, and Sarah were all extremely active in the abolition and women’s rights movement and the Underground Railroad. James Forten died when he was 75 years old, one of the greatest Americans in our history. 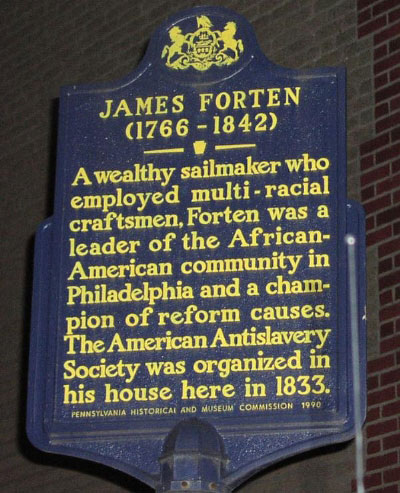