Born into freedom in Pennsylvania. Enlisted in the 3rd Pennsylvania Artillery (later the 4th Continental Artillery) for at least three years. He fought at the Battle of Germantown and was one of the heroes of the Battle of Brandywine. Under heavy fire from the British, Hector refused to abandon his wagonload of ammunition, for fear it would fall into the hands of the enemy. He collected guns which had been dropped by retreating Patriots and drove the guns and ammunition to safety.

He has a street named after him in Conshohocken, PA, seen in the picture with Noah Lewis, who reenacts Hector for school groups. 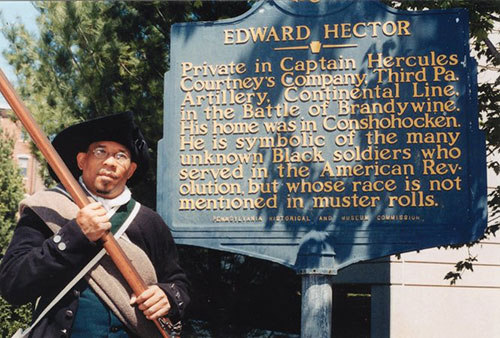