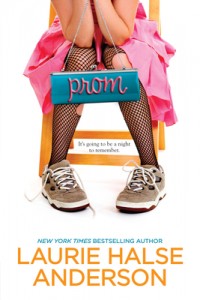 Ashley Hannigan doesn’t care about the prom, but she’s the exception. It’s pretty much the only good thing that happens in her urban Philadelphia high school, and everyone plans to make the most of it – especially Ash’s best friend, Natalia, who’s the head of the committee and has prom stars in her eyes.

Then the faculty advisor is busted for taking the prom money. Suddenly, Ash finds herself roped into putting together a gala dance out of absolutely nada. But she has help- from her large and loving (if exasperating!) family, from Nat’s eccentric grandmother, from the principal, from her fellow classmates. And in making the prom happen, Ash learns some surprising things about making her life happen, too.

“Modern teen life just outside Philadelphia is vividly drawn in Ashley’s first person tale, and it’s both screamingly funny and surprisingly tender. Expect teen readers to be quoting aloud to each other, and giggling.”
—Kirkus Reviews, starred review

“…this book will delight readers who want their realism tempered with fun.”
—School Library Journal

“…Anderson finds humor and heartache in a situation that’s pretty ordinary. But that’s the key to the book’s appeal: how normal it is, and real. In fact, Anderson has dedicated it “to all the ‘normal’ kids who… told me nobody ever writes about them.””
—Philadelphia Inquirer

Because I was engaged to marry my childhood sweetheart when I wrote it and I was too happy to write a depressing book. Plus, I figured it was time somebody wrote a YA novel that featured a strong loving family. I was also really fed up with seeing working class people always portrayed as tragic victims.

The prom has become our common, secular, coming-of-age ritual. I wanted to capture that moment on the dance floor when everyone is on top of the world. I also wanted to write about a ‘normal’ girl who isn’t sure what she wants out of life and doesn’t know where to start looking.

Yes! I chose the main character’s first name very carefully (think about it) as well as the mascot at her school. There is a fairy grandmother figure in the book (can you figure out who it is?), a magic dress, a prince (sort of) and a ball.

No! At least, not my senior prom. I was an exchange student living on a pig farm in the Denmark my senior year. But I went to a number of proms my sophomore and junior years, plus I have four kids, so we’ve been through the whole ritual A LOT.

A little bit. I was not easily excited by anything like proms or pep rallies or school clubs. I think there is a lot of me in the character of Ashley’s mom, too, especially how she loves her husband and kids, even when they’re driving her crazy.