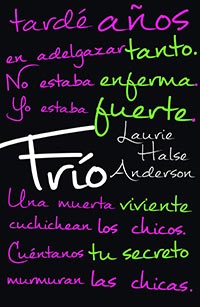 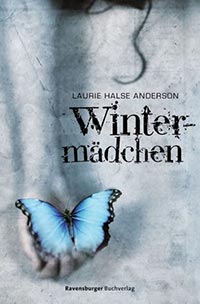 “Dead girl walking,” the boys say in the halls.

“Tell us your secrets,” the girls whisper, one toilet to another.

I am that girl.

I am the space between my thighs, daylight shining through.

I am the bones they want, wired on a porcelain frame.

Lia and Cassie were best friends, wintergirls frozen in matchstick bodies. But now Cassie is dead. Lia’s mother is busy saving other people’s lives. Her father is away on business. Her stepmother is clueless. And the voice inside Lia’s head keeps telling her to remain in control, stay strong, lose more, weigh less. If she keeps on going this way – thin, thinner, thinnest – maybe she’ll disappear altogether.

Interview with the author about this book 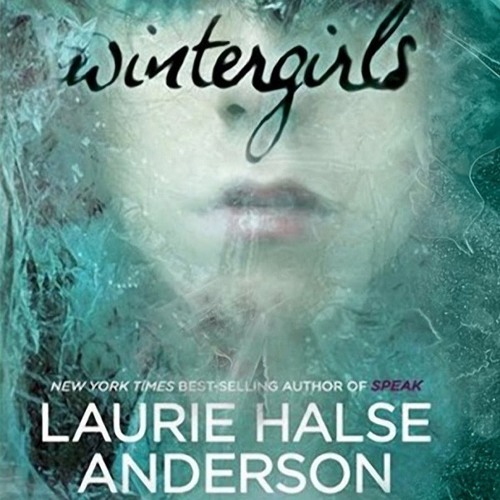 “A brutal and poetic deconstruction of how one girl stealthily vanishes into the depths of anorexia.”
—Booklist Starred Review ⭐️

“…Lia’s guilt, her need to be thin, and her fight for acceptance unravel in an almost poetic stream of consciousness in this startlingly crisp and pitch-perfect first-person narrative.”
—School Library Journal, February 2008, Starred Review ⭐️

Hearing from readers who were struggling with eating disorders made me want to write about their battle. Eating disorders have the highest fatality rate of any mental illness. I wanted to tell a story that would show people how devastating they are.

WINTERGIRLS was the hardest because it forced me to deal with my own body image problems. I cried my way through every draft of that book and emerged a much healthier person for it at the end.

I had some experience with the feelings, but I knew I needed to learn more. I worked with psychiatrists and other doctors who specialize in the treatment of eating disorders. I also talked to women and men who had been in recovery for a very long time. I felt that it would have been immoral to interview anyone who was actively dealing with an eating disorder—I needed to respect their strong need for privacy so they could focus on their recovery.

The marketers of the global consumer culture spend obscene amounts of money every year to make people feel bad about the way they look. If they can make us feel bad about our bodies by showing Photoshopped images of models who are on the brink of starvation, then they can sell us whatever they want. This is even more dramatic in the minds of teenagers, whose bodies are changing radically and whose brains are still developing.

If I had the chance to talk to a teenager who hates her body, I would say, “I understand that feeling. It’s a terrible one, isn’t it?” and then I would ask her about what makes her joyful and what she is afraid of. Eating disorders are mental illnesses that need to be taken seriously and treated by professionals. But for those people who still only coping with confusion about their body image, it is very helpful to have people who will listen to the things they are struggling with.