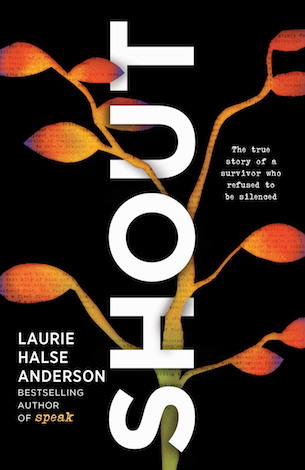 A searing poetic memoir and call to action from the bestselling and award-winning Laurie Halse Anderson!

Bestselling author Laurie Halse Anderson is known for the unflinching way she writes about, and advocates for, survivors of sexual assault. Now, inspired by her fans and enraged by how little in our culture has changed since her groundbreaking novel Speak was first published twenty years ago, she has written a poetry memoir that is as vulnerable as it is rallying, as timely as it is timeless. In free verse, Anderson shares reflections, rants, and calls to action woven between deeply personal stories from her life that she’s never written about before. Searing and soul-searching, this important memoir is a denouncement of our society’s failures and a love letter to all the people with the courage to say #metoo and #timesup, whether aloud, online, or only in their own hearts. Shout speaks truth to power in a loud, clear voice– and once you hear it, it is impossible to ignore.

“In this powerful memoir told in free verse, Anderson delves into her past and that of her parents, sharing experiences at the root of novels such as Speak(her rape at the age of 13) and The Impossible Knife of Memory (her father’s PTSD after World War II). … In one especially contemplative poem entitled “how the story found me,” Anderson turns on its head the common refrain “follow your dreams,” recommending that readers “follow your nightmares instead/ cuz when you figure out what’s eating you alive/ you can slay it.” Her potent words and willingness to shout her message are proof of the soundness of that advice.” PW Starred Review ⭐️

“The verse flows like powerful music, and Anderson’s narrative voice is steady and direct… It’s a strong example of how lived experience shapes art and an important book for the #MeToo movement. Necessary for every home, school, and public library.” Kirkus Starred Review ⭐️

“The classroom benefit of this book is undeniable—it’s a primer on writing and on living, and both Speak and Anderson’s effect on teens has never waned. But more than that, it is a captivating, powerful read about clawing your way out of trauma, reclaiming your body, and undoing lifetimes of lessons in order to use your voice as the weapon it is. Fervent and deafening.” Booklist Starred Review ⭐️

“What better time is there than now for a book like this?” Bitch Magazine

“Anderson is breaking ground again with a memoir-in-verse that challenges categorization and the ways we’ve thought about the YA genre for the past 20 years.” BookPage Starred Review ⭐️

“By turns angry, commanding, raw, and wistful, this collection is a praise song to survivors, a blistering rebuke to predators, and a testament to the healing power of shared stories.” Horn Book Starred Review ⭐️

“Throughout, [Laurie’s] love of languages and linguistics shows in her style, which ranges from tightly crafted, densely sonorous verse to more freewheeling and even incantatory pieces…it will ring out to readers who themselves believe in the power of stories to ‘share our great/ incarnations of hope.'” BCCB Starred Review ⭐️

“With ‘Speak’ Anderson opened the door for more novels exploring the deeply felt and deeply personal aftermath of sexual violence. ‘Shout’ serves as both a testament to the life-altering, lifesaving impact of these types of stories – and as an urgent and brutal reminder of their ongoing necessity.” Courtney Summers, New York Times Book Review

“Poetry is very often written to be heard, and this collection in particular ought to be heard—spoken proudly by Anderson, outloud, and at full volume.” Booklist Starred Review ⭐️ (audiobook version)

“More than a gifted writer, Anderson is an advocate for anyone who feels alienated. Her sensitive, incisive book is essential for all young people.” Mahnaz Dar, School Library Journal Starred Review ⭐️

“Anderson’s prose is so gorgeous, with such visual and arresting phrases […] that at times the book needs to be put down to absorb her utter mastery of language.” Kerensa Cadenas, Entertainment Weekly

“If there was ever a doubt about the power of Anderson’s authorial voice, make no mistake now. Truly, this book is equal to the sum of its parts; while specific verses or chapters can stand alone, it is also a collective masterpiece which addresses pressing and universal social issues.” Alicia Abdul, School Library Connection ⭐️

“Shout makes a powerful claim that more honest talk about our sexual experiences can only help.” Jonathan Alexander, Los Angeles Review of Books