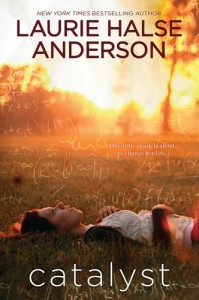 Meet Kate Malone – straight A science and math geek, minister’s daughter, ace long-distance runner, new girlfriend (to Mitchell “Early Decision Harvard” Pangborn III), unwilling family caretaker, and emotional avoidance champion. Kate manages her life by organizing it, as logically as the periodic table. She can handle it all – or so she thinks. Then, things happen like a string of chemical reactions: first, the Malones’ neighbors get burned out of their own home and move in. Kate has to share her room with her nemesis, Teri Litch, and Teri’s little brother. The days are ticking by and she’s still waiting to hear from the only college where she’s applied: MIT. Kate feels that her life is spinning out of control – and then, something occurs that truly blows it all apart.

Set in the same community as the remarkable Speak, Catalyst is a novel that will change the way you look at the world.

What Your Guidance Counselor Won’t Tell You

“Intelligently written with multi-dimensional characters that replay in one’s mind, this complex, contemporary story carries much of the intensity and harshness of Speak.” Kirkus Reviews

“…is a deftly fashioned character study of a seldom explored subject in YA fiction: the type-A adolescent.” Amazon.com

“An enforced friendship with a tough-girl incest survivor and her lisping baby brother/son challenges all of Kate’s assumptions and turns her world on its head. Written by the Printz Award-winning author of SPEAK, this title will be popular with older teens.” Audio File

Yep. Grew up right next the church, as a matter of fact. Ate a lot of chicken and biscuits dinners. I also have a strange fondness for Jell-O salads, preferably with vegetables inside.

And yes, my dad liked the book.

No way. I barely passed chemistry. I had to relearn it to write the book. I stink at math, too. I wanted to write about a character who views the world from a very different perspective from my artsy-fartsy literary one. It was fun.

You have to write an essay, don’t you? Pay attention to the layers of meaning in the last names of the important characters. You might be able to make something of the theme of myth vs. science, too. Oh, and there are a few Alice in Wonderland references, if you know what you’re looking for. Good luck.

I really liked writing in the setting of Merryweather High (where both books are set). After SPEAK, I thought I might reuse some of the teachers. But I ran into an unexpected problem. Kate Malone is a very different kid than Melinda Sordino. Her perspective on teachers like Mr. Neck is not that of Melinda’s at all. So I scrapped the scenes that had the teachers from SPEAK. And then when the character of Teri Litch showed up, the book took off on its own path.

It was, however, very nice to be able to show the readers of SPEAK that Melinda is doing well.