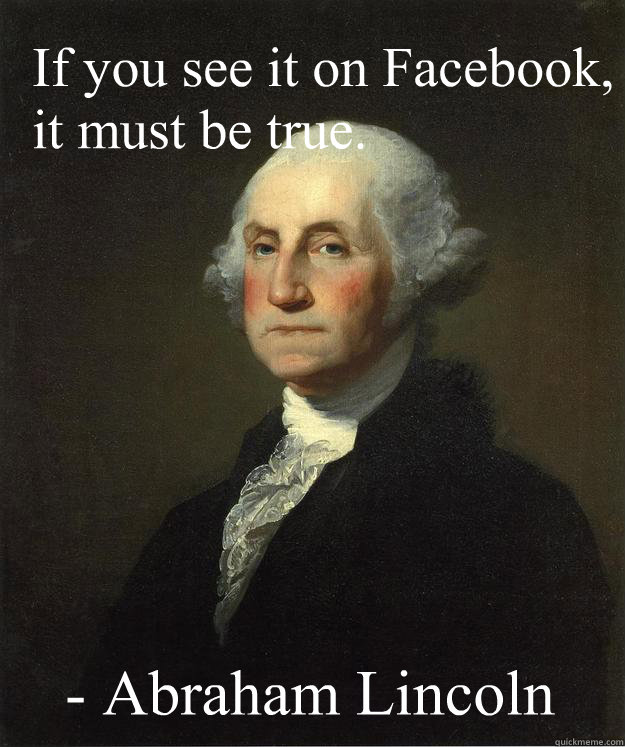 I have a conflicted relationship with George Washington. This bubbles to the surface every time I see someone misattribute a quote to him on Facebook, or misstate facts about his changing attitudes about sundry and various things, or pass along bald-faced lies. 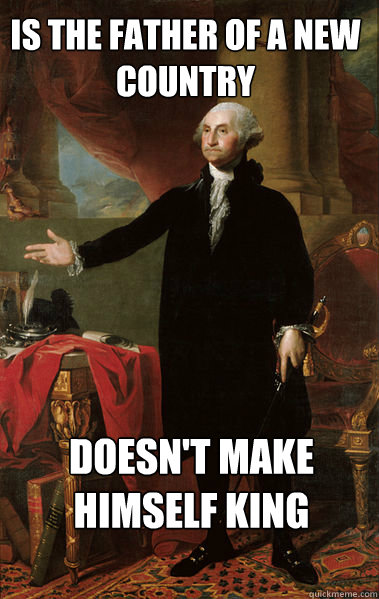 Having read way too many books about him and the context of his era, in addition to spending years studying his letters, I have to say that I really, really like George.

He pulled together an army out of scraps of other men’s dreams and his own ambition. He was an incredible leader, a commanding officer whom his men looked up to and admired. He had a fierce temper which he kept under control… most of the time. He was ruthless when the situation demanded it. He listened to advisors. He battled America’s political leaders in his ongoing efforts to feed, clothe, and pay his troops. He was bold. Patient. A great dancer. Apparently his calves were so well-defined that when ladies got an eye-full of them tastefully decked out in fashionably thin stockings, they’d swoon. He loved his family. He had dental problems. He believed in self-sacrifice.

America would not exist without him. I believe he is the key, irreplaceable Founding Father.

But Washington defies bumper stickers and memes. You can’t boil him down to a slogan or two because HE CHANGED HIS MIND about several critical issues. This might be what I love about him the most. His experiences during the Revolution changed him, particularly the way he looked upon African-Americans and the institution of slavery.

I posted the meme above about Washington owning slaves on Tumblr on July 3rd. Most people acknowledged the painful hypocrisy. But I was stunned by the people who rushed in to snarl at me. They insisted that Washington had freed his slaves after the Revolution, or that they were never his slaves at all, they belonged to Martha, and… and….

It is hard to admit that a man whom so many admire had a lot of ugliness in his life. But it’s time to get over our squeamishness and deal with the facts.

1. George Washington became a slave owner at age 11, when he inherited ten slaves from his father. He inherited eight more a decade later from his brother. He bought and sold slaves on his own account and became responsible for the lives (and profits) of the slaves who belonged to his wife, Martha. (George did not own her slaves directly; he had to manage them, along with the property of Martha’s first husband, as a sort of trust for Martha’s children and grandchildren.)

2. Washington had slaves whipped, chained, and sold off to the brutal slave owners in the Caribbean.  (Note to haters: there is primary source documentation for this in the form of Washington’s letters and account books. Don’t waste your time and mine in the comment section by calling me names. Deal with it, OK?)

There is conflicting evidence about how he treated his slaves outside of punishments. Some letters written by visitors to Washington’s estates describe him as a harsh master, others describe him as more gentle than most.

3. From 1759-1772 George Washington bought at least 42 slaves. The number of people he owned increased beyond this as his slaves had families.

4. The American Revolution dramatically changed the way that Washington viewed African-Americans and the institution of slavery. I cannot emphasize this enough.

Before the War, Washington was a typical white Virginian, upper class slave owner. Reading his letters in which he talks about selling people, punishing them, etc. will churn your stomach.

During the War he experienced first-hand the number of African-Americans who were willing to fight for the Patriot Army, for the nation’s freedom and their own. At first, Washington did not want any men of color joining the Continental Army. He changed his mind.

Ten percent of the soldiers at Valley Forge were African-American men. (The source for this statistic is the Continental Army’s own head count.) Most of those were free black men. A few were slaves who had run away to join the army. Other were slaves who were forced to serve in the place of the man who owned them. There is plenty of documentation of slaves who were promised their freedom by their masters if they served in the army, and then had their owners renege on the deal.

Conversations with white aides who believed in freeing slaves, notably the Marquis de Lafayette and aide-de-camp John Laurens also helped Washington change his mind about the morality of slavery.

(John Laurens was the son of Henry Laurens, who was the fifth president of the Continental Congress and one of the richest men in America. Henry Laurens owned hundreds of slaves. He made a fortune kidnapping Africans, transporting them across the Atlantic and selling them into slavery. From 1749 – 1762 his company, Austin & Laurens, sold more than 10,000 human beings. His son John, in contrast, thought slavery was immoral and pushed hard to be allowed to form a regiment from South Carolina of African-American men who would be given their freedom in exchange for joining the military. His plan was ridiculed and defeated.)

The other factor in Washington’s change of heart was his travels through the Mid-Atlantic and New England states during the war. Washington was a practical farmer who grew up only seeing large-scale farming performed by slaves. North of Virginia he saw well-managed farms that were run using only paid labor. This opened his eyes.

As a result of all of this, Washington decided that he would never buy or sell another slave. At that point he owned 105 people outright, and he managed the additional 111 who were owned by Martha (that was the trust I mentioned earlier).

5. In his will, Washington freed all the slaves that he owned and made sure that they would be cared for and supported as they adjusted to their lives as free people. When he died he owned 123 people and Martha owned 153. He could not free the slaves owned by Martha’s first husband’s estate because of Virginia law.

The language in George Washington’s will is fascinating and incredibly specific. He went to great lengths to make sure that Martha’s four grandchildren – who he knew would be super unhappy at not inheriting his slaves – could not break the will. Washington made sure that the child slaves he owned would be bound out to learn trades, and to learn how to read and write. Those children were to all be given their complete freedom when they reached age twenty-five. 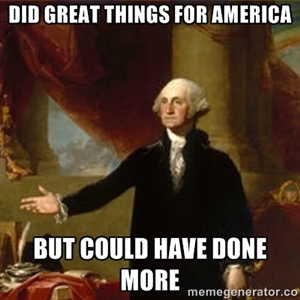 I hate the fact that Washington was a slave owner. I hate that he and most of the other Founding Fathers participated in slavery. I am furious that they didn’t have the balls to write a Constitution that freed all Americans, instead of just freeing the white ones.

But I’m proud of George for being man enough to learn, grow, and change. That’s why he’s my favorite Founding Father.

In my experience, many white people don’t know how to talk about this stuff. Some don’t even know about it. That’s part of the reason I wrote CHAINS and FORGE and it’s why I am working so hard on ASHES. (No, I don’t have a publication date for ASHES yet. Stay tuned!)

Because I love America and I am a big history nerd, I go fifty extra miles in my research to ensure that my fictional stories are well-grounded in historical evidence. That’s why I have four historians review every book for accuracy before we go to press.

What do you think about George Washington? How do you make peace with his positive contributions to American history versus his slave owning and lack of participation in the post-Revolution abolition movement?

PS – Of our first eighteen Presidents, thirteen of them were slaveowners. (Washington, Jefferson, Madison, Monroe, Jackson, Van Buren, Harrison, Tyler, Buchanan, Johnson, and Grant) Did you know that? If not, how does that change the way you think about how you were taught history?

Mount Vernon has a page devoted to Washington and his slaves.

Take this quiz to find out more about our early presidents and slavery.

Henry Laurens and The British Slave Trade to Charleston S.C.

4 Replies to “My conflicted relationship with George Washington”