In 1992 I was a stay-at-home mom with a 5- and a 7-year-old. I worked part-time as a freelance journalist, writing for magazines and the Philadelphia Inquirer newspaper. And I watched a LOT of the The Oprah Winfrey Show. It had been a lifeline to sanity from the days when I had a newborn and a toddler who resisted toilet training. It gave me a sense of community. It reminded me to read. It nudged me along my spiritual path. I adored it.

I kept writing for the newspaper, but I began to tell people that I was trying to become a children’s author. Most people would look at me with the kind light of pity in their eyes and say, “But don’t you want to write a real book?”

(In their pointy heads, real = for grown-ups.)

I made every mistake a wanna be writer could make. I sent out first drafts. I wrote what I thought would be published instead of what was in my heart. I collected hundreds of well-deserved rejection letters, until finally, FINALLY, I got The First Phone Call from an editor saying that Henry Holt want to publish a picture book of mine. That book, Ndito Runs, came out in 1996.

Most people looked at me with the kind light of pity in their eyes and said, “That’s nice, but when are you going to write a real book?”

My mother-in-law, Anastasia, never did. She said, “I bet you’re going to be on the Oprah Show. She likes all kinds of books!”

In 1999, Speak was published and named as a National Book Award Finalist. That was also the year that Oprah Winfrey was awarded the National Book Foundation’s 50th Anniversary Gold Medal in recognition of her efforts to promote reading. I saw Oprah across the room at the cocktail party for the authors before the dinner. I was too chicken to do anything more than steal glances and admire her shoes. (She looked amazing.)

I knew that I’d never have a book featured on Oprah’s show, though I will admit I’d fantasize about it. I kept writing and writing and eventually I was getting more contracts than rejection letters. Anastasia’s faith in both Oprah and me never wavered, not even when I divorced her son. (One of the most peaceful divorces in the world, btw. That’s also a post for another day.)

Well, Anastasia, the day you told me would come is here. 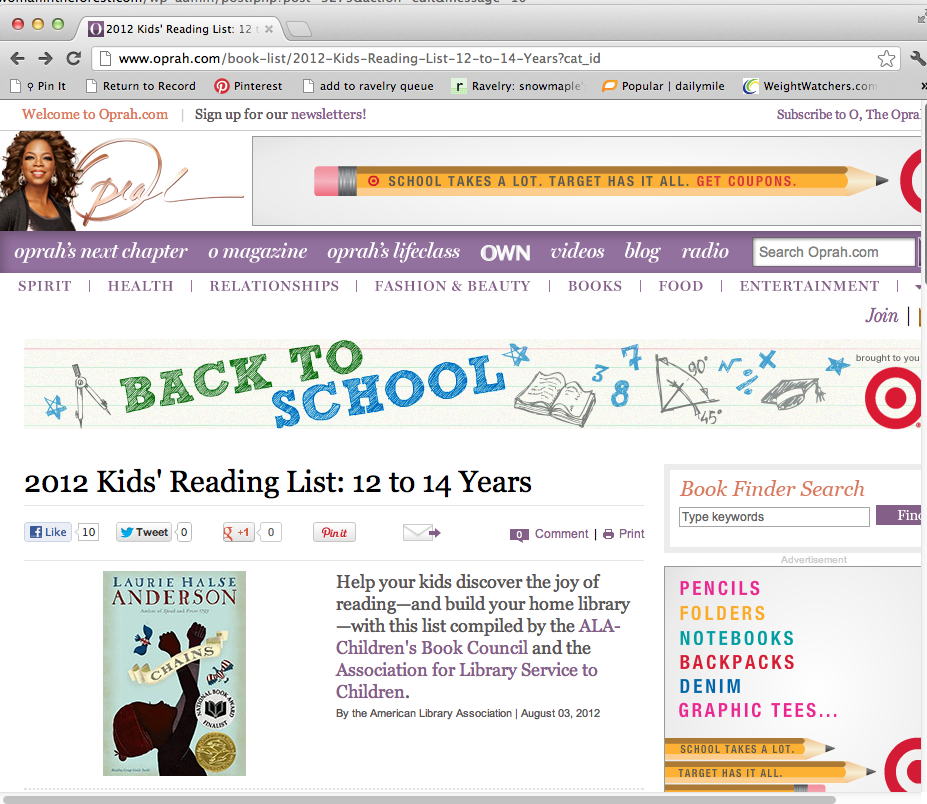 (Excuse me for a moment while I get up and dance wildly around the house again!!!)

There are many other wonderful books on the list, too, so be sure to check out all of them.  Haven’t read Chains, yet? Then read this new review.

I lift my mug of tea and salute Anastasia and Oprah for two decades of encouragement and support! Thank you! 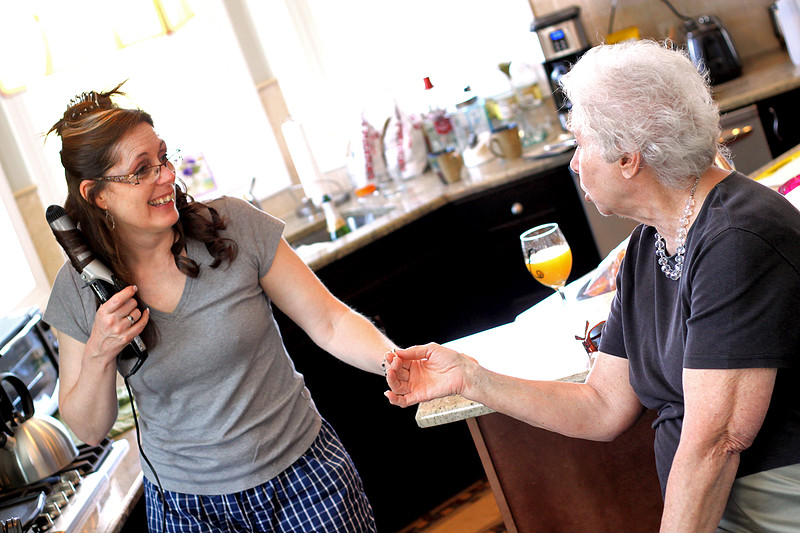 This extremely glamourous photo is of me and Anastasia the morning of my daughter Meredith’s wedding a few months ago.

“The biggest adventure you can ever take is to live the life of your dreams.”

Today’s Prompt: Write down this date: August 17, 2032. How old will you be? Next, jot down five of your writing dreams. Pick the most outrageous of those five dreams and write a paragraph or two – from the perspective of August 17, 2032 – and describe how that dream came to life. Then list the three things you can do TODAY to bring yourself one step closer to that dream.

If you haven’t talked to your mother-in-law recently, give her a call or send up a prayer to her today.